Shame on you, Wolfgang Puck. Shame, shame, shame! Were you drunk when you allowed the company that supplies coffee to the William Penn hotel in Pittsburgh to use you name on their product? Did you even taste this piss-poor slop before you signed the check? Like most of us, I’ve seen enough TV cooking shows to know that there’s no surer way to get booted out of Hell’s Kitchen than to admit to Chef Ramsey that you didn’t taste your food before serving it to the customer. I suppose this rule only applies to amateurs and hopefuls. Once you become a celebrity chef, you’re allowed to serve a dog turd so long as it has a fancy garnish, a clever name, and warm vomit drizzled around the edges of the plate. [1] 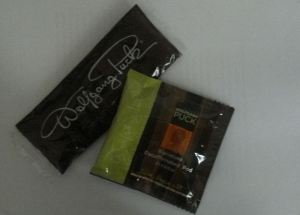 The Wolfgang Puck “Signature Blend” has about as much in common with coffee as King Herod had with childcare. The only reason I could come up with for brewing a cup of this brown, acrid sludge was to use as a dye to cover up minor scuffs on my shoes – although I’d still worry a little about what it might do to the leather.

I can accept that hotel coffee is not there to provide satisfaction but merely to offer a quick, although weak, shot of caffeine to tide you over until you can find some real stuff. However, there’s a point at which is is so bad that you can provide more customer satisfaction by not providing it all all.

The Puck coffee has the laughingly ironic tagline of “live, love, eat,” which I suggest, in the interest of truth in advertising, should be amended to “live, love, eat, then hunt down Wolfgang and force him to drink a bucket of his signature blend.” It really is that bad.

So it was fortunate indeed that the hotel had laid on a few pots of Starbucks coffee for the preconference session I was part of [2]. After a couple of cups and some orange juice, I was hopped up and ready to go by 8:00 a.m., not my choice of starting time for a Saturday morning session but I can’t always have my way.

The title was How Core Vocabulary Works In Five Languages, the specific languages being English, French, German, Spanish, and Mandarin. We slipped in a mention of Japanese but seeing as this is a work-in-progress, there wasn’t much to talk about other than that it’s a project.

Core vocabulary is made up of words that can be used across ages, clinical categories, topics, and situations. For example, that, want, mine, and in pop in a number of research studies that include data collected from toddlers [3] and pre-schoolers [4] to elderly women [5] and Australian fast-food diners [6]. From the non-AAC world, large scale corpora studies also show a high frequency predominance of a relatively small number of common words [7, 8, 9]. More interesting is the fact that the same words are represented with relatively similar frequency across all languages.

The main thrust of the day was to say that given we can identify core, high-frequency words in a language, these are the ones we need to focus upon as a major component of an AAC system: in short, teaching you and want is better than teaching hamster and umbrella. As I’ve said before – and will probably keep saying – this doesn’t mean hamster and umbrella are not important but that based solely on the objective data about word frequencies, there is more “bang for buck” to be had from you and want than hamster and umbrella. Words such as the latter two are not core words but fringe – words which are low in general frequency, appear in limited situations, and in specific populations. In a couple of days I’ll be posting a report on my next presentation which suggests we need a three-way classification; core words, key words, and fringe words.

Anyway, the take-away for the day was that focusing on teaching a high-frequency core of around 350 words is a much more productive intervention that a random set of 350 words that include a lot of low-frequency nouns.

Tomorrow is Sunday and a day of rest for the Dudes.

[2] Yes, I have ended a sentence in a preposition but this less formal than “…the preconference session of which I was a part.” Like splitting infinitives or starting sentences with prepositions, sometimes breaking style rules is fine, especially in the colloquial world of blogging. Of course, this doesn’t mean that the Dudes won’t take a swipe at other folks who continue to consistently flout the rules.