Economics, when all is said and done, is based on some pretty simple principles, which we can summarize as follows:

1. People want/need stuff.
2. There is only so much stuff available.
3. Rare stuff has more value than common stuff.
4. Economics is about how stuff gets moved around from person to person.

I’m not sure why it took Adam Smith over 1000 pages to explain this in his canonical Wealth of Nations in 1776, or Thomas Picketty close to 700 pages in his 2014 Capital in the Twenty-First Century. I guess one paragraph with 4 bullet points wouldn’t sell as a book,

But if you want an example of simple economics, you need look no further than the price of a humble bottle of water. Here’s your “Dudes Economics 101” courtesy of our trip to the 2015 Assistive Technology Industry Association (ATIA) conference in Orlando, Florida. 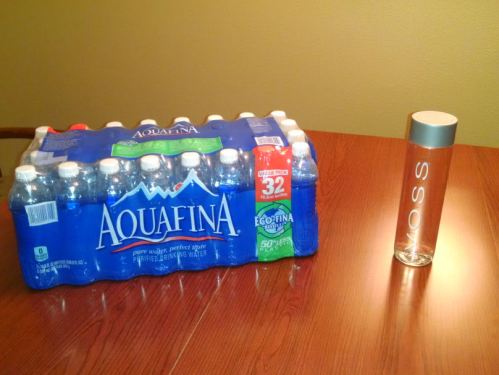 Water is one of those commodities that folks need in order to live. You might think your life would come to a screeching halt if your smart phone disappeared, but surprisingly it wouldn’t because a phone is a “want” not a “need.”

When you stay at a hotel, you need water, and often not just the water contained in a beer. Typically hotels provide a coffee machine in your room so you can make a hot beverage but from experience, many hotels have faucet water that tastes of chlorine, sulfur [1], metal, or anything other than the standard watery taste of “nothing.” In fact, the stuff that comes out of the tap is only “water” in the sense that it’s wet and clear (although the latter is not always the case.) Which leads us to the notion that…

2. There Is Only So Much Stuff Available.

Gold, diamonds, platinum, tigers, honest politicians; these are all examples of things that, on a global basis, are in short supply.  And in the tiny world that is the Caribe Royale Hotel in Florida, when it’s 11:00 PM and you’re thirsty, water is also in short supply. Given that the tap water is undrinkable, this means the bottle of filtered artesian Norwegian spring water [2]  lovingly provided by the hotel becomes an example of “only so much stuff is available.” And because your alternative is to go to the all-night on site store or get in a car and drive “somewhere else,” the next lesson in economics is that…

If something is in short supply, it can be very expensive. Being rare in of itself doesn’t mean something is valuable – it has to be desired or necessary in order to be worth something. Diamonds are only valuable so long as someone, somewhere wants them, otherwise they are just highly compressed pieces of coal; a Rolex is worth several thousand dollars – if you like Rolexes; and a Starbucks grande non-fat latte is worth on average $3.80 – if you like coffee.

So when your mouth is as dry as the bottom of a bird-cage, $5.00 for a bottle of water seems like a bargain. In other places and at other times, you’d sooner shoot yourself in the foot than spend $5.00 for just water but in this place and at this time, the value of that colorless, odorless, tasteless liquid can be jacked up to near obscene levels.

You are probably aware of the phrase “location, location, location” as the answer to the question “What’s the most significant factor to take into account when opening a store?” or “Which factor will play a critical part in determining the price of a house?” but the same phrase applies to all economic transactions at some level. This is because…

4. Economics Is About How Stuff Gets Moved Around From Person To Person

The hotel can charge $5.00 for a bottle of water because it’s sitting there in the room so you don’t have to go anywhere or do anything other than twist off the cap. What they include in the price is the shifting of the stuff (water) from one person (themselves) to another (you).

Purely as an exercise in Economics (well, and perhaps as a demonstration of how cheap the Dudes are) on our way back from dinner at the Dakshin, a wonderful Indian restaurant, we stopped off at a Wal-Mart store and found, to our fiscal delight, that there was a special sale of Aquafina bottled water – $4.98 for a pack of 32 bottles. That’s 15 cents a bottle, and a significant saving when compared to the $5.00 hotel water – sorry, “filtered Norwegian Spring Water.” On that basis, we reckoned that if we drank ONE bottle each and threw away the other 30, we’d still be $5.02 ahead of the game! In terms of the “Dudes 4-Point Model of Economics,” we’d moved stuff ourselves (point 4) and bought from a place where stuff wasn’t rare (point 2) and so was not a premium price (point 3). 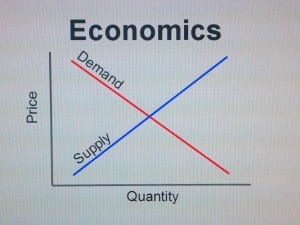 So there you have it. Proof that attending a conference can be an educational event above and beyond the overt content. Other bloggers will have details about the sessions and the exhibition and all that stuff, but only the Dudes will create a complete fiscal model based on having to spend $5.00 for water. Pedants and doryphores [5] might want to quibble with some details regarding our admittedly simple 4-Point Model of Universal Economics but we like to think that it’s in its naked simplicity where the value of the model lies. “A thing of beauty is a joy forever.”

Notes
[1] I have to work hard to be able to spell sulfur like this, rather than sulphur, which is what I learned in school when I was a lad in England. The latter gets flagged as “wrong” on WordPress, and Microsoft words also gently scolds me with it little red line. It derives from the Latin sulfur(em) or sulphur(em) and is found in Middle English with a number spellings, such as sulphre, sulphure, sulfur, sulphur, soulphre, solfre, sulphyr, and others. The sulphur spelling appears to have become the more common by the end of the 17th century but other European languages opted for using an “f” (Spanish azufre, German schwefel, French soufre, and Italian zolfo). Even the American Lexicographer in Chief, Noah Webster, used sulphur, with the switch to sulfur occurring in the US relatively recently – the early 20th century. It has now become one of those US/UK differences that folks love to talk about. In a 1988 article, Mitchie and Langslow note that, “Together with driving on the left, the use of ph in sulphur, be it in acid rain or human metabolism, has remained an English prerogative.” Michie, C. A., & Langslow, D. R. (1988). Sulphur or sulfur? A tale of two spellings. BMJ : British Medical Journal, 297(6664), 1697-1699.

[2] In the world of Marketing, adjectives are important. If you want to sell a product, you can’t just offer “water” or “beer,” you have to  stick some lipstick on that pig by using adjectives. “Spring Water” sounds better than just “water,” but “Crystal-clear, Fresh Spring Water” sounds even better. “Crisp, Cold-Filtered Beer” invites you to part with more money than just “Cold Beer.” Restaurants teach their wait staff to use “suggestive selling,” which is simply having them to use adjectives whenever they recommend food; “Would you like some of our fresh, crispy fries with that?” or “We have a delicious, spicy chili that’s popular with all our diners.” Adjectives make money – and so does providing lists of these for copywriters, the best of whom will have Richard Bayan’s popular Words That Sell on their bookshelf. Actually, I would recommend this book to educators and Speechies who are teaching vocabulary because it’s chock-a-block with synonyms for many words, and the “Key Word Index” makes it easy to find them.

[3] I’ve posted this definition before but it’s worth repeating because it’s interesting: A doryphore is defined by the OED as “A person who draws attention to the minor errors made by others, esp. in a pestering manner; a pedantic gadfly.” It comes from the Greek δορυϕόρος, which means “spear carrier,” (a δορο is a “spear” and ϕόρος means “to bear or carry”) and it was originally used in the US as a name for the Colorado beetle – a notable pest. This beetle was known as “the ten-striped spearman,” hence the allusion to a spear carrier.  To then take the noun and turn it into an adjective by adding the -ic suffix meaning “to have the nature of” was a piece of cake – and a great example of using affixation to change a word’s part of speech. As always, you leave a Speech Dudes’ post far smarter than you entered it!

Like Loading...
This entry was posted in Miscellany and tagged adjective, ATIA 2014, conference, economics, value, water. Bookmark the permalink.