Not Dead Yet; But Not Asleep Neither

Life, as we know, has a nasty habit of sweeping us along at a pace that gives us scarce a chance to breathe. This is why the last post from the Dudes was on June 24th – and that’s close on 2 months ago. 2 months! My personal goal has always been to have one per week but as our dear readers know the closest I’ve ever come to that is during the Christmas Quiz of last year. It’s also the case that I can’t just “rattle off” a post because contrary to what some might believe, I actually think about what I’m writing, and often have to track down articles and information to support whatever outrageous claims I might be making. So a post of around 1500 words (a “short post” is probably 1000) can take me a few hours, spread over a few days.

So my plan during July was to add a couple more posts taken from the 14 draft posts sitting on WordPress [1], based on the assumption that while I was taking a week’s vacation in the UK visiting my family, I’d have some time to write.

No such frickin’ luck.

This turned out to be one of those vacations that you get from and feel you need another holiday! During that one week my wife and I visited Accrington, Blackburn, Blackpool, Bolton, Burnley, Lancaster, Llandudno, Portmeirion, and York [2], as well as meeting up with my brother, parents, in-laws, and a couple of friends from way back when. In retrospect, imagining I’d have time to “sit back and chill” seems to have been a stupid idea. That’s not to say we didn’t have a good time (and that includes the day we had a blow-out and had to be towed for a repair because rental cars in the UK now seem to have given up on having spare tires) but it turned out to be much busier than I’d expected.

Needless to say I also managed to send my cholesterol levels above what my doctor considers safe by indulging in a slew of traditional and delicious food such as real bacon butties [3], full English breakfasts [4], boxes of Maltesers, steak and kidney puddings and meat pies, chips, mushy peas, Indian curries, fried fish, gammon ham, clotted cream and scones, and so on and so on. 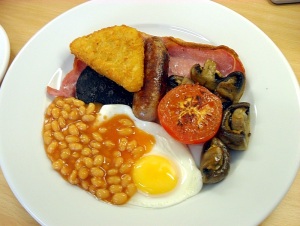 It’s now close to 2:00 AM and I’m writing because I couldn’t sleep. Knocking out a 1000-word post seemed to be a reasonably good way of tiring myself out, and it seems to be working. On the other hand, the thought of a breakfast fry-up is making my stomach rumble so I’m probably going to have to raid the fridge for a quick snack before bed – although it’s likely to be healthier than a Full English.

And so to bed. To sleep, perchance to dream…

Notes
[1] The working titles for those draft posts include “The Case of the Flat Adverb,” “Peppa Pig: Learn Core Vocabulary from Watching TV,” “Ip, Dip, Pen and Ink,” and “Bathrooms, Toilets, Restrooms, and Loos: Just Where DO You Pee?” I’m open to suggestions as to which folks would like to see first – otherwise I’ll tackle them as soon as I can learn how NOT to be distracted by Life.

[2] Our UK readers will notice that all these places are pretty much “up t’north,” which is where I comes from. Visiting old haunts is something of a secular pilgrimage whenever I’m back over the pond, so although these towns may seem rather uninteresting to my fellow northerners, they have an almost spiritual value to those of us who consider ourselves ex-pats and less English than they used to be!

[3] A butty is northern dialect for a sandwich, originating from bread and butter. A good butty uses real butter and is then stuffed with heart-clogging fillings such as fried bacon, cheese, chips (fries for our American cousins), spam (oh yes, spam indeed!), jam, mashed potatoes, or anything that you can shoehorn between two slice of bread.

[4] A proper English has fried eggs, fried bacon, fried mushrooms, fried tomatoes, baked beans, fried black pudding, and fried bread – which is a slice of bread that you drop into the pan at the end of the fry-up so as to soak up all the fat that’s still there. You might also want to include hot buttered toast to that list because you can’t have too much fat to start the day off. I’m pretty such the American Heart Association has the Full English on a hit-list but if you’ve never experienced one, you have to add it to your bucket list; probably the last item on the list.

One response to “Not Dead Yet; But Not Asleep Neither”